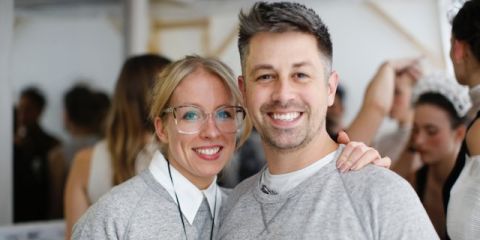 Catherine Teatum & Rob Jones | Teatum Jones | Rehab Biog
Rehab Designers Catherine Teatum and Rob Jones of Teatum Jones studied fashion design at
Ravensbourne and Central Saint Martins respectively.
Launching in 2011 they created a brand known for designing fashion from human stories and
pioneered the movement towards a more unified and inclusive fashion industry.
They were the first brand at London Fashion Week to commit to casting models with disabilities.
Having presented award-winning shows since 2014 they’ve partnered with the world's most
iconic retailers including Harvey Nichols, Liberty London and Netaporter.
In 2016 they became the first ever British designers to win the prestigious International
Woolmark Prize at NYFW.
In 2018 they were asked to design Emma Watson's entire sustainable wardrobe for the G7
summit in Paris.
Synonymous with dressing the powerfully talented and outspoken, their designs have been
worn by Tracey Ellis Ross, Annie Lennox, Munroe Bergdorf, Jennifer Hudson, Zendenya and
Andrew Scott.
In 2022 they were elected members of the prestigious Artworkers Guild, recognised for their
expertise in the craft of innovative and modern textile and fashion design.
They recently designed over 150 'Unity' themed costumes for the Queen's Silver Jubilee
pageant watched by over 10 million people.
In 2023 their work will be acquired by the world famous Victoria and Albert Museum to join their
permanent archival display of the world's most important fashion designers.